Want to get Sitefinity working with Thinktecture's IdentityServer? I've got you covered.

So the other day I was told at work "we need to build a new app and we don't want users to sign in with a different username and password". Yep, I totally agree with that statement - it's not the 2000s anymore (the noughties anyone?). Our church has gotten comfortable with their current name and password combo (which comes from Ministry Platform), so that was that. And it would make for terrible UX to avoid Single Sign On (SSO) in our situation.

I found a great resource from Thinktecture called IdentityServer. If you haven't heard about IdentityServer yet, get on the band wagon. It's a great open light-weight security token service (STS) built using .NET 4.5, ASP.NET MVC4, WCF and Web API. You can quickly get enterprise-level SSO scenarios up and running. It's also quite easy to add custom claims and membership management.

If you're unsure about what an STS is, you can get more info here. Either way, here's a quick diagram: 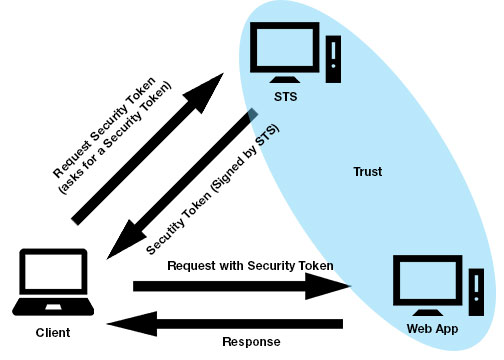 We run our main site on Sitefinity. So the idea is to get Sitefinity to work with IdentityServer so we can have future web apps accept the same security token issued for Sitefinity and log them in, i.e. Single Sign On. I know... I know... If you're familiar with Sitefinity at all you may be asking, why don't you just use one of Telerik's provided solutions? There's a few problems with that. First problem is we don't use Active Directory in our Sitefinity instance at all and that's one of the exact out-of-the-box solutions they provide. And I also wasn't about to spin up a Sitefinty instance as a STS by itself. That just seemed like a bad idea, especially if I want to get other non-Sitefinity apps to work with it. Second, while I could spend a lot less time modifying their provided solution to work with our custom membership provider, I wanted something that would be more universal, more future-proof (if there is such a thing), more open. IdentityServer has a lot in it in terms of supported protocols and tokens. And it's being actively developed. And it's open. So there. Boom.

So I started my journey down to Sitefinity and Custom STS land. And it was fun. Until I found out that Sitefinity uses a modified version of the Simple Web Token (SWT) protocol. Time to go to the mattresses.

I forked IdentityServer on Github, and basically merged the STS code that's available from one's Telerik account under the Sitefinity downloads section with IdentityServer. It's not the prettiest thing ever, but it works. Sitefinity is not only using a modified SWT, but it also requires a slightly different order of events. Rather than reading the SWT format provided by IdentityServer and then verifying the token, it requires that the token be encoded in the url and the request on the STS be redirected back to the Sitefinity instance it was orginated from. Honestly, I don't know if this is good practice or not, but it does seem a little odd to be implemented that way.

Okay enough background, let's talk about how to get it done.

Most likely in a real world scenario you will need a new membership provider at the very least; the above steps are just to get you going.